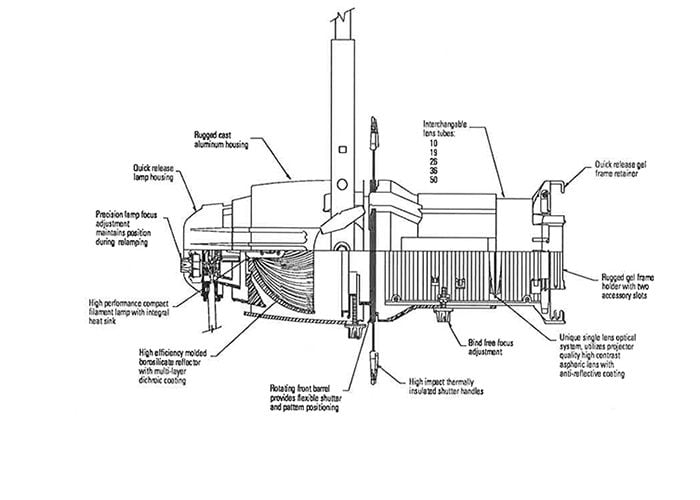 In 1992 the first nicotine patch was introduced to stop smoking. The largest shopping mall in the US was constructed in Minnesota. A Few Good Men, The Bodyguard, and Reservoir Dogs hit the big screen, and Boyz II Men, Michael Jackson, and Nirvana were at the top of the charts. A shipping container filled with 28,000 rubber duckies was lost at sea – to this day, they’re still being found around the world.

But more importantly, 1992 goes down in history as one of the most transformative years for ETC. Sensor® Dimmers, the Obsession console, and the fixture that catapulted ETC into the spotlight, the Source Four®, were launched at the LDI Tradeshow.

Development of the Source Four started with the need for a new light source. The industry assumption at the time was, “you can’t develop a better spotlight until you develop a new lamp.” So that’s exactly what we set out to do.

In 1990, Entertec, a design company headed by Dave Cunningham and Gregg Esakoff, started the research project that would later become Source Four. Three years passed before the first Source Four fixture was shipped.

Early design sessions were documented on flip charts which still exist, bound in their original form. The following are images of several of those pages. 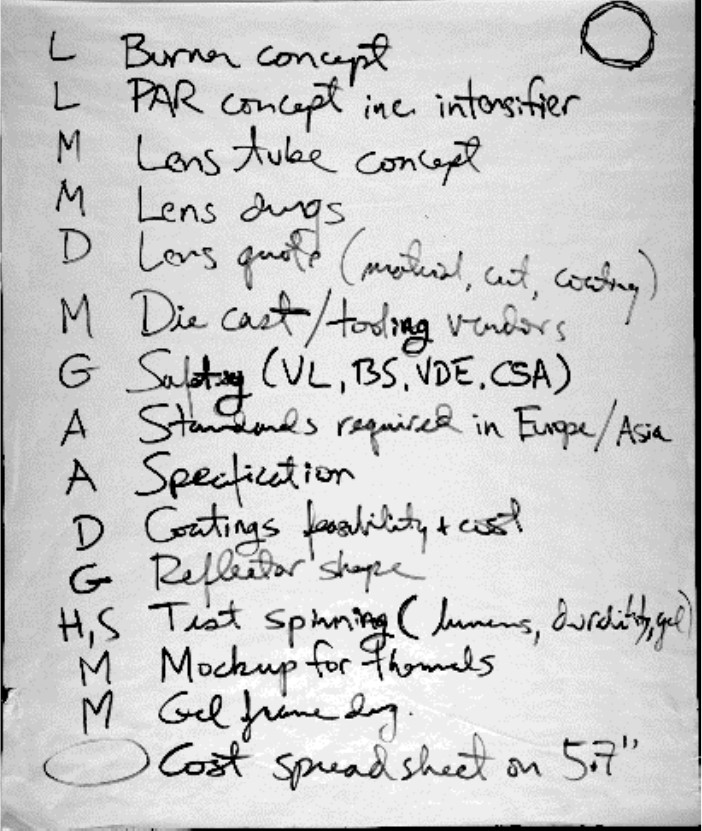 This image shows the long list of original design issues to tackle before taking the fixture to market. 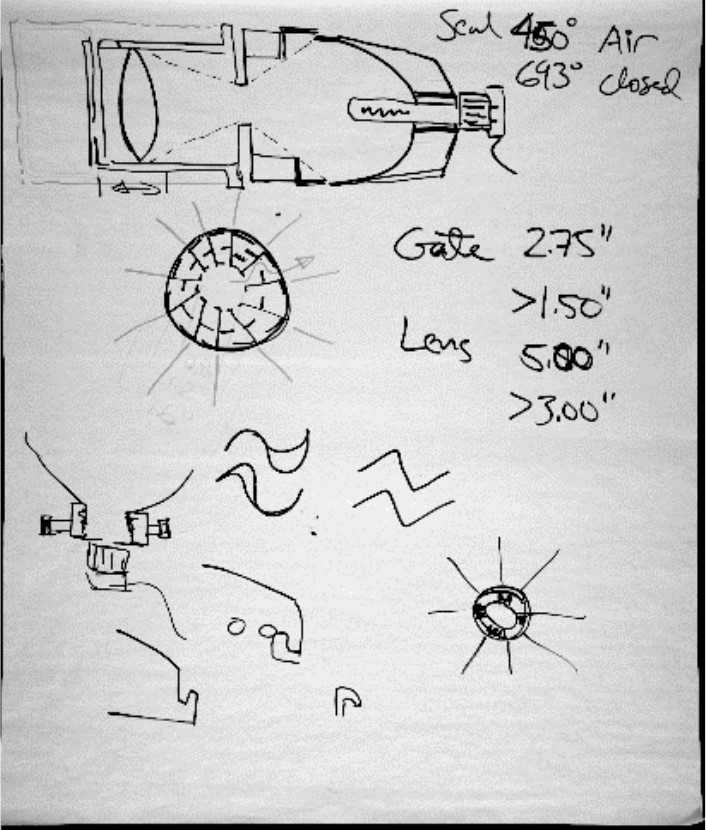 This original concept drawing shows the fixture as it starts to take shape. Here you can see the lamp base, the single lens, and the rotating barrel. 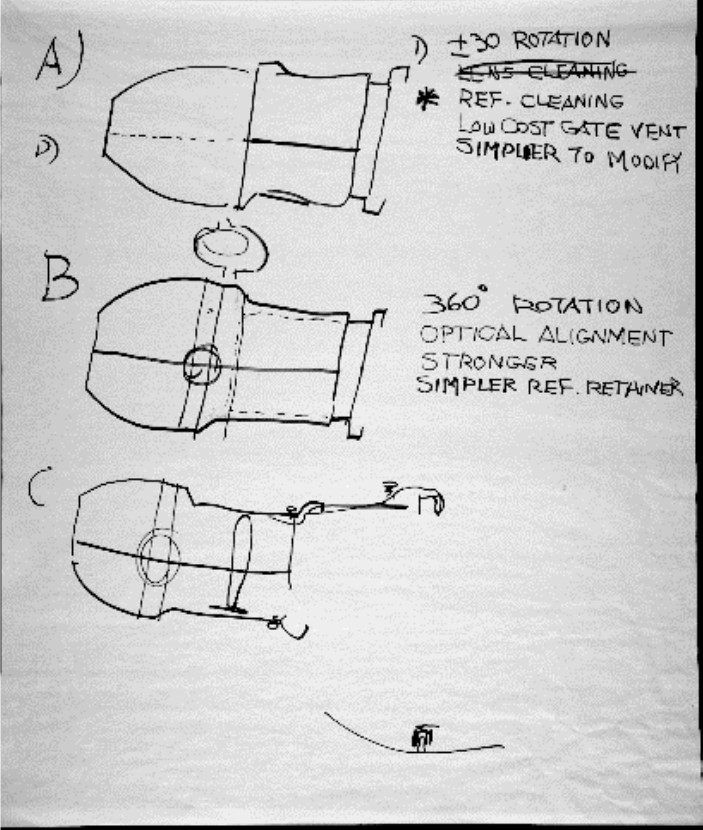 The barrel rotation would become one of the most significant features of the Source Four. 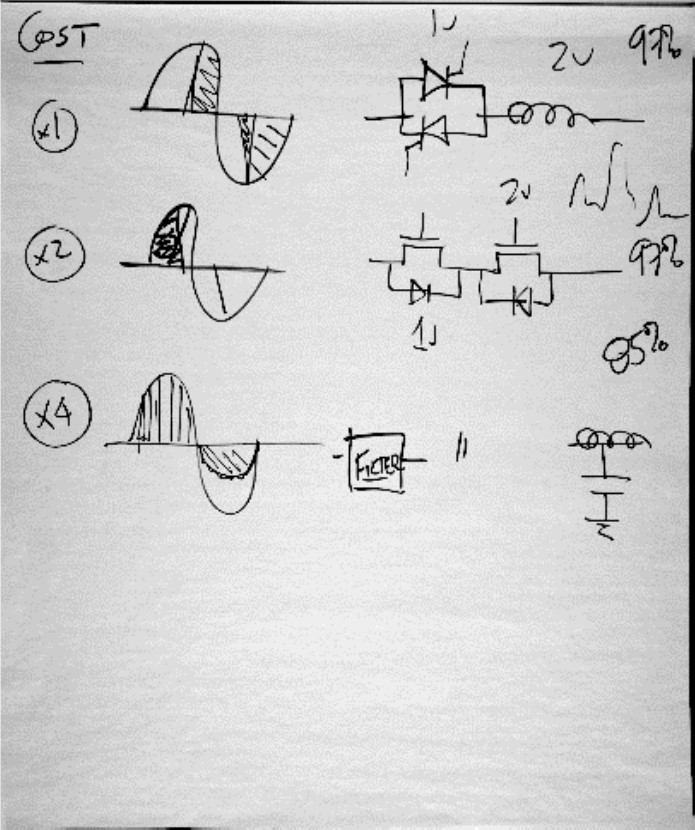 During development, the team identified the desire to reduce voltage and further compact the filament. Research continued to include a new dimming technology as well. This research eventually led to ETC’s Dimmer Doubler.

“When I first saw the Source Four, it was just an HPL lamp, glass reflector, and a lens on an optical rail in Dave Cunningham’s lab. But it was 40% brighter than a 1000W FEL and used only 575W of power. I was awe struck,” says Fred Foster. “It was even more fun to watch the looks on the faces of the LDI attendees when we launched the product a year later.”

“We were still small in ’92,” recalls Ellen White, ETC Outreach and Training Specialist. “Our booth was maybe 20×30 and in the far back corner of the expo hall. I remember Strand had a booth right up front. They had a group dressed up in costumes that I seem to remember as barbershop quartet outfits. Strand was also launching a new fixture – which we knew nothing about at the time – and these barbershop guys were yelling at people to get them into their booth. It took people a while to get through them and make their way back to the ETC booth, but slowly they did. At first, it was just the larger dealers like Production Arts and Barbizon. But eventually, everyone else seemed to find us.” 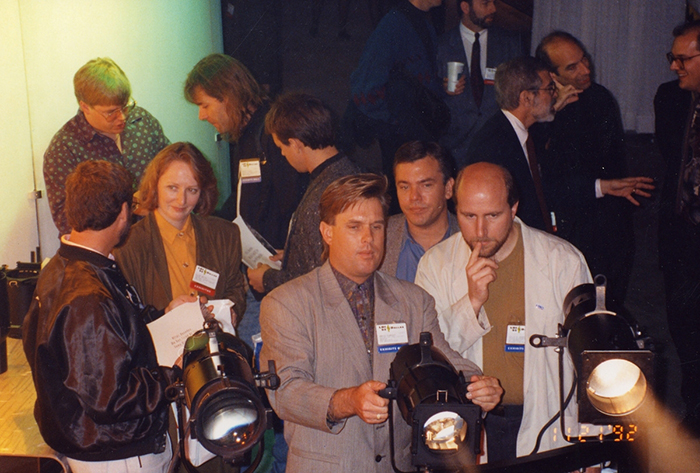 The 1992 LDI booth was clearly busy, as this photo shows. Ellen is in the brown blazer.

Conversations continued through the end of the day and on to dinner. I remember thinking how much fun it was to be there, a part of something so unexpectedly huge.

I later heard a rumor that Strand’s barbershop guys were just sitting in their booth with no one to talk to…”  Ellen laughs as she recalls the scene.

In March of 2002, we shipped the one-millionth Source Four fixture. 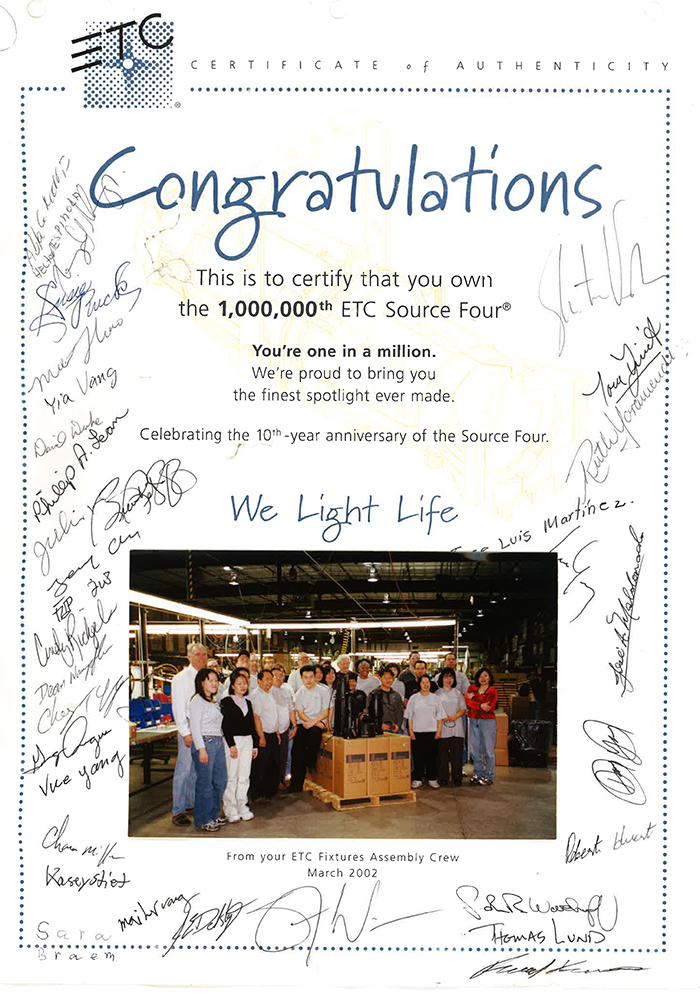 Now, 25 years later, we’ve sold over 3.5 million Source Four fixtures and made over a dozen variations of the original, incandescent fixture.

Want to help us celebrate 25 years of Source Four?

Head over to our website and submit images of your Source Four and Source Four LED fixtures as they exist, installed in your venue.  www.etcconnect.com/sourcefouris25

Please position your photos in landscape orientation and do your best to match the templates provided. We’ll use as many of the photos as we can in a crowd sourced video set to release this fall.

ETC paints the stage at the Guthrie 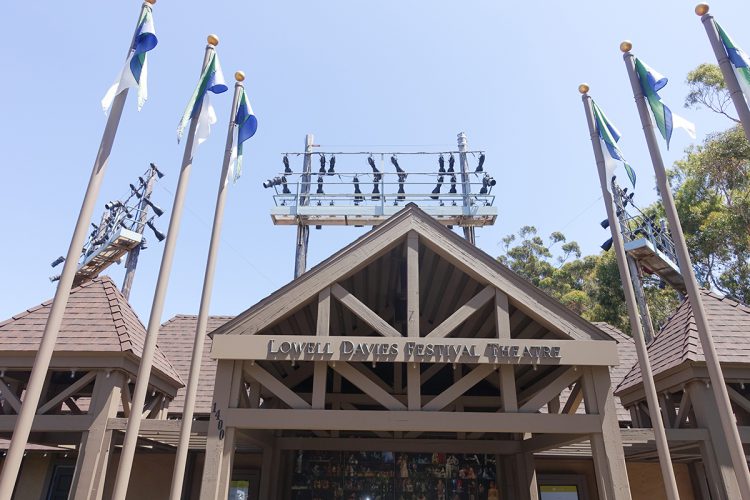 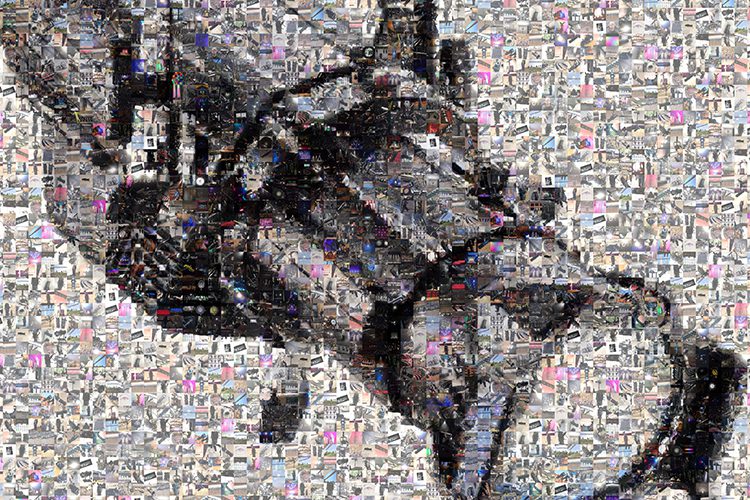 Twenty-five years ago the Source Four® fixture was launched at LDI. This past summer we asked you to send in photos of your Source Four fixtures at work in the field. You responded in overwhelming...